At Flores de Vida, the sky is blue, surprisingly so when you come from the city where it is always more or less veiled by pollution. The sun beats down hard, making it vital to take a break in the beginning of afternoon. Various strategies are necessary because of the heat. Strolling around with as little clothing as possible is one of them, as clothes don’t allow the skin to breathe, thus making the heat unbearable. Another one is seeking refuge under an old olive tree, or better yet, in the fresh shadow of a fig tree. Finally, there’s the possibility of building a shelter: in the picture above, the gazebo has been extended by a canopy made of cane stalks, supported by three ropes stretched from one olive tree to another and by an old tree trunk transformed into a central pole. The August team took great pleasure putting it up with the means available for our Fiesta Cruda buddies! Preparation and conditioning of produce

If the harvest of olives is a big project in December, the follow-up of different procedures of conservation keeps one busy during the other periods of the year as well. One option is drying them (in the dryer-pickup) for three to four weeks. Another option is to put them in jars so that a lacto-fermentation process takes place with no need to add salt. This phase has to last for at least one year, and it happens in big glass jars. The olives, inedible at the moment of picking, become supple and savoury. Delicious. This summer Nat’, Annie and Sylvie put in bags of 300 g olives that had been fermenting since 2016! At first, they had to be “degassed” by laying them in the dryer for 24 hours, then conditioned before going through the vacuum packing machine, lend to us by David, a friend of Nat’s. These bags are then put on sale.

Charlotte and Sylvie have prepared around twenty bags of 500 g of almonds picked last year. The bags are ready to serve as rewards during the crowdfunding campaign.

Annie, Charlotte and Sylvie prepared zucchini chips with the produce harvested at Javier’s (see the section “What Are We Eating?”). They sliced the zucchinis with a mandolin and spread them on dryer grids (picture below). The slices are left for at least two or three days in the dryer so that they become nice and crispy. They are then conserved in big glass jars in the cellar. 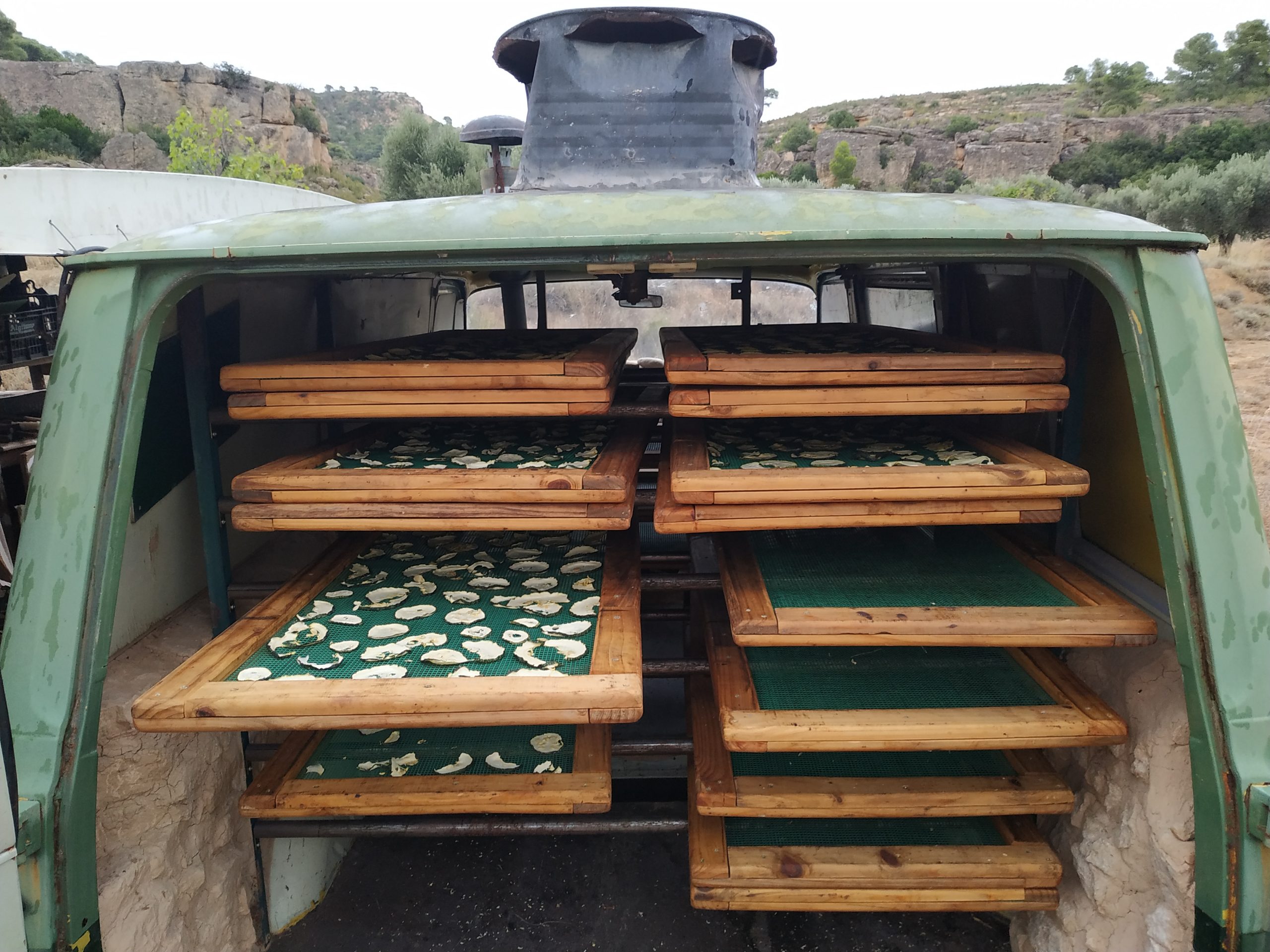 The new pump is being installed

The new pump has been installed and will be functional in a few days once the start-up of the system of technical control has been finalized. There will then be only one tap to close and another one to open for all water inlets of the higher part of Flores de Vida (taps, showers, irrigation taps) to be supplied by the borehole from now on. It remains to be financed however, which is the principal motivation for the crowdfunding campaign that is in the works. In the Vegetable Garden

The garden requires daily work that Nat’ cannot carry out when he’s alone on the site. Which has been the case quite frequently thus far. For this reason, the garden hasn’t yet produced anything this summer.

All the trees have been abundantly watered during summer and many are about to deliver their production: nectarines, peaches, plums, but above all figs and grapes.

Online Team Gets Together!

The month of August will be rich in visits thanks to Fiesta Cruda and “Séjour de Ressourcement” (Revitalization Experience) and it has already allowed most of the online team members to meet “for real”. Joëlle, Pascale, Patricia, Christelle and Greg have been terribly missed.

It’s quite moving, when you have actively participated in online meetings and in the elaboration of communication tools in distance, to suddenly find yourself on the ground, in the middle of olive and fig trees, under the blazing sun! It’s quite moving as well to meet in person the people you’ve so far seen only in video conferences. The beginning of August was thus highly charged with very positive emotions!

The body gets little by little accustomed to the intense heat and the team also gets used to living together and to learning to cooperate in the real life. The land and the installations require a multitude of maintaining activities: making sure the irrigation system for trees is functioning, improving the supply system of the shower, or putting up little installations like the canopy or a protection for the trampoline, conditioning the produce or checking that water filters are filled, toilet buckets emptied, and all toilets equipped with toilet paper! Several people will be arriving during August and there needs to be a good organization in place for the work to be distributed smoothly.

Beautiful challenges of community life coming up and a passage to reality that will highlight the different issues of living together. With joy and an unshakable good will! For the moment, the land provides little to eat apart from some bunches of grapes and the few already ripe apples and figs, and Nat’ buys the essential from one of the rare organic farmers in the region, Javier. His farm is located on the outskirts of Caspe. On Friday 7th August, the team went there to collect zucchinis, cucumbers, bell peppers, tomatoes, and above all, a good pile of melons Piel de Sapo and magnificent watermelons. A little something to fill the bellies of the participants at Fiesta Cruda!

Picture taken from the plateau where the team meets regularly in the evening and which overlooks the site. 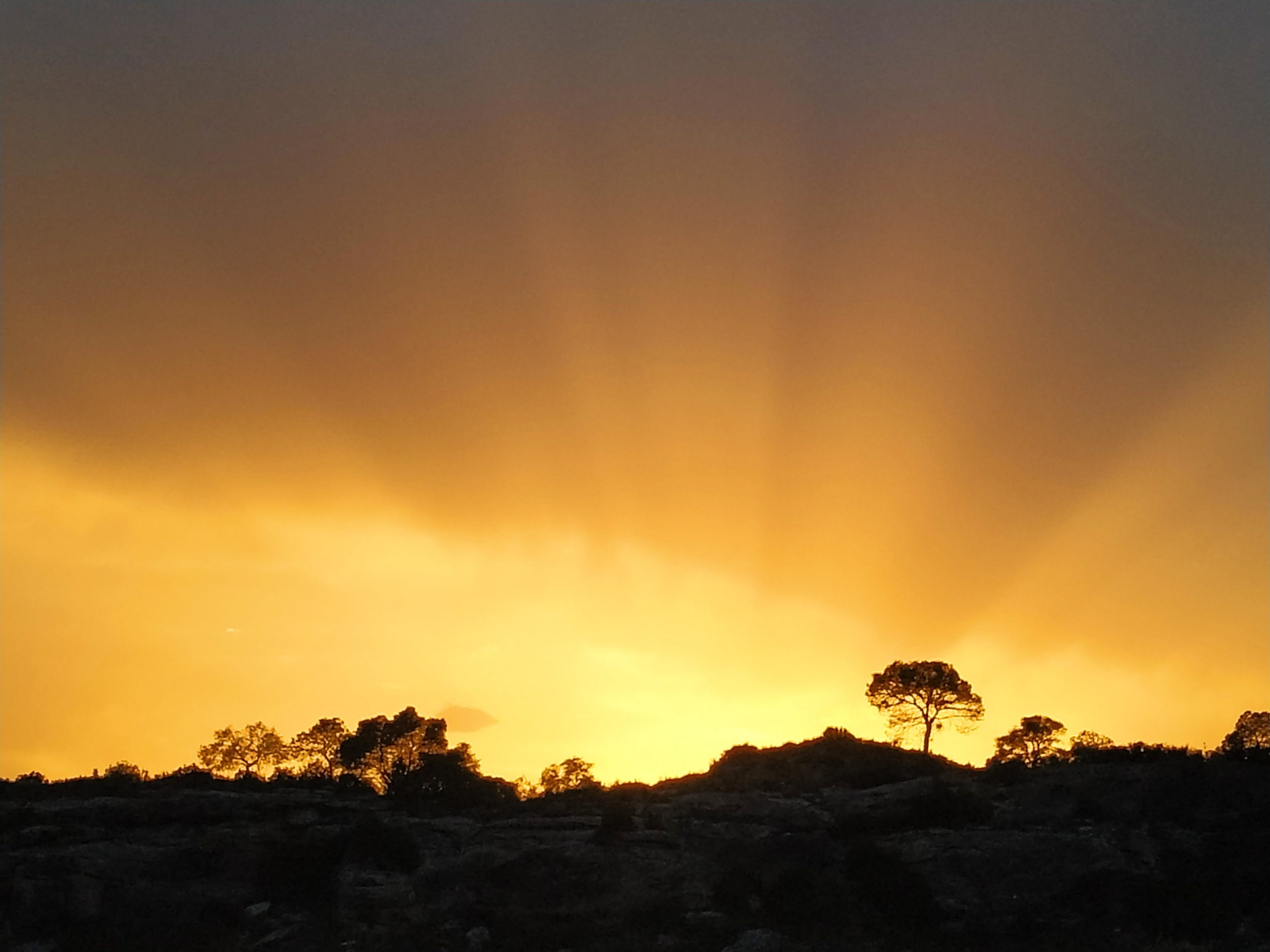