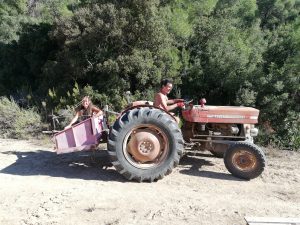 What Are We Eating?

There are more figs than we can possibly eat or dry. The grapes are a little sick this year but there are still enough of them to snack on. We have finished the delicious vineyard peaches, now we’re waiting for the yellow peaches to ripen. Some apple trees produce tasty apples.

What’s more, we have an abundance of almonds, with the ones we collect from the trees as well as those harvested during the past years.

We also made a trip to Francine’s to fill up on carobs and to pick some prickly pears.

Vegetablewise, we keep eating zucchinis, cucumbers, tomatoes, and other produce that we collect at Javier’s, the organic farmer based in Caspe. Lactofermented olives from past years complete our meals. 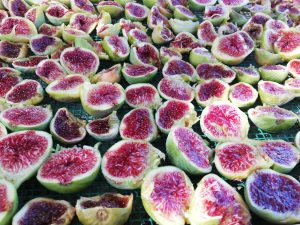 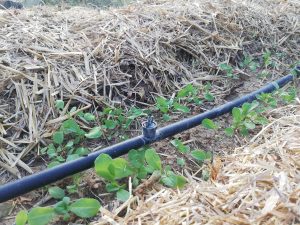 A Community in an Ecoplace

Two permanent residents have settled down: Maria and Juliette. The experience lived along with Nat’ since their arrival is moving the project towards the idea of a community rather than an eco-village where individual habitats would occupy more space. In this perspective, Nat’ has bought himself a trailer and is preparing to move in. Casita will then become a collective space: room for music practice, office, library, a place to get together…

Opening Up to the Territory

The site will thus function as a community where each member will have a personal space of around ten square meters, but where most of the activities take place in collective spaces. By the way, this small community has opened up to its environment by joining a group that reflects on the current world situation. Nat’ and Maria thus met up with five other people in front of the Caspe townhall. All these people shared the idea that we create our reality, and that change must begin with ourselves. Very interested in Flores de Vida, our Spanish friends joined a WhatsApp group to keep exchanging. To be continued!